The Best Drobo Alternatives in 2022

Drobo, one of the most popular storage brands among photographers, has filed for Chapter 11 bankruptcy. While that doesn’t mean the brand is going away, it might be time to look into it. an alternative option just in case.

Drobo has had great difficulty keeping its supply chain intact during the COVID-19 pandemic, and the company says it has experienced production delays across its entire line. This problem could be at least partially responsible for the company’s current financial difficulties. 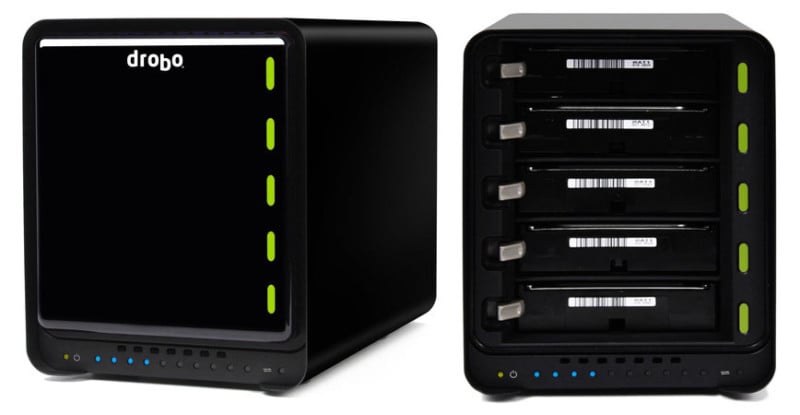 Those worried about the future of Drobo and its ability to maintain software support may want to start looking for alternatives, and luckily there are some other great options out there. Drobo offers two direct-attached storage (DAS) and two network-attached storage (NAS) options and below are solid replacement options for each.

Although laptops and desktop computers tend to come with significant built-in storage options, they can often be quite expensive and don’t necessarily provide as much storage as photographers will need over time. That’s why many professionals will choose some sort of tethered local storage solution for backing up data.

Hard disk drive (HDD) options generally offer the best price per gigabyte of storage, as they are much cheaper to produce than solid-state drives. The downside is that individual hard drives can fail more easily over time and are slower, so photographers often deploy them in a RAID array, which makes them work together to deliver better speeds and RAID arrays allow one or more disks to fail and not. lose data (depending on the RAID configuration and the number of disks connected).

Drobo offers two options for RAID arrays: the 5D3 and the B810i. The 5D3 supports up to five hard drives while the B810i can accommodate up to eight. The more disks an array can hold, the greater the backup capacity and the more RAID options available. 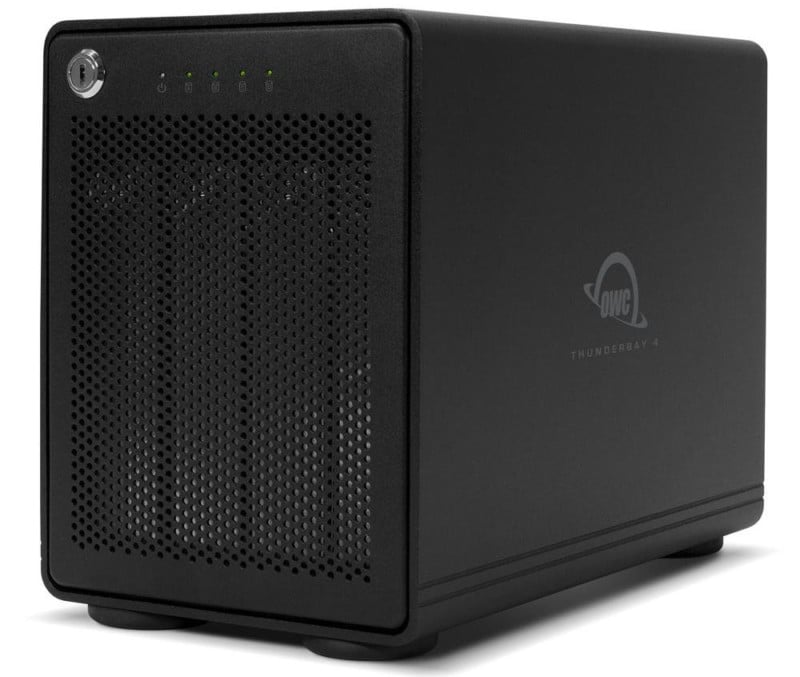 OWC, which stands for Other World Computing, makes a host of affordable PC and Mac peripherals, including hard drive bays and Thunderbolt docking stations. The ThunderBay 4 is our choice to replace your Drobo due to the large number of options OWC offers for the price.

The ThunderBay has four hard drive bays, one less than Drobo’s five-bay 5D3, but it still supports RAID 0, 1, 4, 5, 10, and JBOD configurations and transmits data over a Thunderbolt 3 connection. OWC supports the array with its SoftRAID disk management software that lets you determine what type of RAID to use, monitor disk health, and is cross-platform between macOS and Windows.

Compared to the Drobo 5D3, which costs $700, the ThunderBay costs $629. Keep in mind that both of these prices are before the actual drives are added and in either case you’ll need to purchase four (or in Drobo’s case, five) hard drives in order to start using them. OWC offers options between 4TB and 72TB, but the enclosure will work with any standard 3.5-inch or 2.5-inch HDD or SSD. OWC also has an outstanding five-year warranty on the case.

OWC equips its drives with Toshiba hard drives, and Backblaze has shown that the company’s drives are performing well so far in 2022. If you’d rather go with another hard drive manufacturer, you can.

Other great options in this category include the SanDisk Professional G-RAID Shuttle and the LaCid 6Big. The G-RAID is much more expensive at $2,100 for the base model because it comes with drives included with no option to just buy an empty case. That said, SanDisk includes four 6TB Western Digital Ultrastar hard drives in this package, which cost around $172 each (about $688 total). The G-RAID Shuttle can also be equipped with up to 72TB of storage at the time of purchase.

LaCie is a Seagate company and the 6Big has more capacity than Drobo’s 5D3, OWC’s ThunderBay 4 and the G-RAID Shuttle. As you might have guessed from the name, it has six bays in total and can be had for $2,300 for a similar total storage amount of 24TB (just like with the G-RAID, the case and discs are included together). The advantage of the 6Big is that it can take more drives and therefore theoretically hold more total capacity, although the company only offers up to 108TB for $6,500. 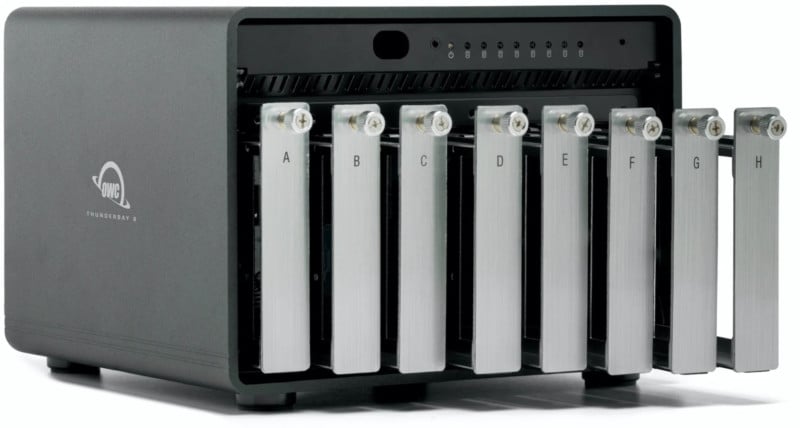 For many of the same reasons we chose the OWC Thunderbay as the best alternative for the Drobo 5D3, the 8-bay OWC ThunderBay 8 is the best choice to replace your B810i. While it’s hard to find a bay that can immediately replace plug-and-play with the 5D3, as it uses the rather unusual 5-bay configuration, the ThunderBay 8 can pick up where the B810i left off. .

The ThunderBay 8 supports Thunderbolt 3, compatibility between macOS and Windows, the company’s SoftRAID XT disk management and monitoring software, and an excellent five-year warranty. The ThunderBay 8 can be purchased as a single enclosure for $879, which is a significant discount over Drobo’s B810i, but it can be outfitted with 16-144TB of storage via Toshiba hard drives.

SanDisk also offers the 8-bay G-RAID Shuttle, but it’s not cheap. The giant array starts at $7,300 for 96TB of storage, but the company will go up to 144TB of storage for $9,000. The limited customization options and high price probably make it a poor choice for those trying to replace their Drobo B810i, but it’s an option for those who really want to stick with the WD or SanDisk brands.

Drobo offers two NAS options, the 5N2 and B810n, which are similar to the company’s DAS options except for networking features. 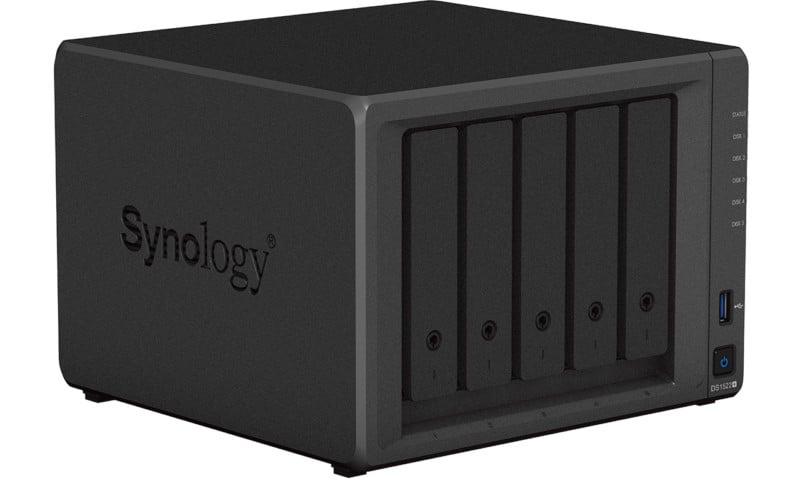 Synology is basically the clear champion of NAS storage options, and the recently announced DS1522+ has added a five-bay array to the company’s lineup that’s a great choice to replace a Drobo 5N2. DS1522+ has a relatively small footprint, can be expanded up to 15 drives (by connecting multiple enclosures together), and supports NVM3 SSD caching and 10GbE networking via adapter.

DS1522+ is managed via Synology’s DiskStation Manager software and can be used as a dedicated local backup solution. There’s even a photography-specific app in Synology’s software called Synology Photos, which allows amateur photographers looking to manage their growing collection to quickly extract and back up media from their phones, sort and organize images and make them easily shareable with permission control.

The Synology DS1522+ is a little more expensive at $700, which is more than Drobo’s $499 offering, but given Synology’s outstanding reputation, the price tag means reliability. If you’re okay with upgrading to a four-bay NAS array, Synology’s $550 DS920+ is a solid alternative. Synology doesn’t offer hard drives included with its enclosures, so you’ll need to purchase them separately. 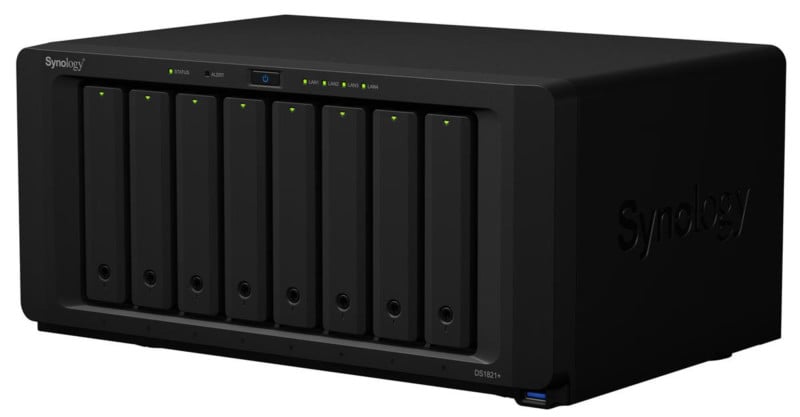 If you’re replacing your Drobo B810n eight-bay array, we still recommend going with Synology. The company’s DiskStation DS1821+ is its 8-bay solution that can handle demanding application workloads and large numbers of concurrent users. It’s powered by a 2.2GHz AMB Ryzen Quad-core processor, can be expanded up to 18 drives with optional expansion units, and it supports 10GbE networking.

Everything that on the software side makes Synology the best choice in the five-bay department also carries over to the eight-bay option, and it’s hard to beat Synology here since the company’s entire business relies on excellent NAS performance. The Synology DiskStation DS1821+ is available for $1,000, which is less than Drobo’s $1,200 B810n, but either way you’ll need to supply your own hard drives or SSDs.

The DevOps software market will explode | IBM, Broadcom, Version One

How to Choose White Label Crypto Exchange Software for Business

Why Intel Killed Its Optane Memory Business • The Register